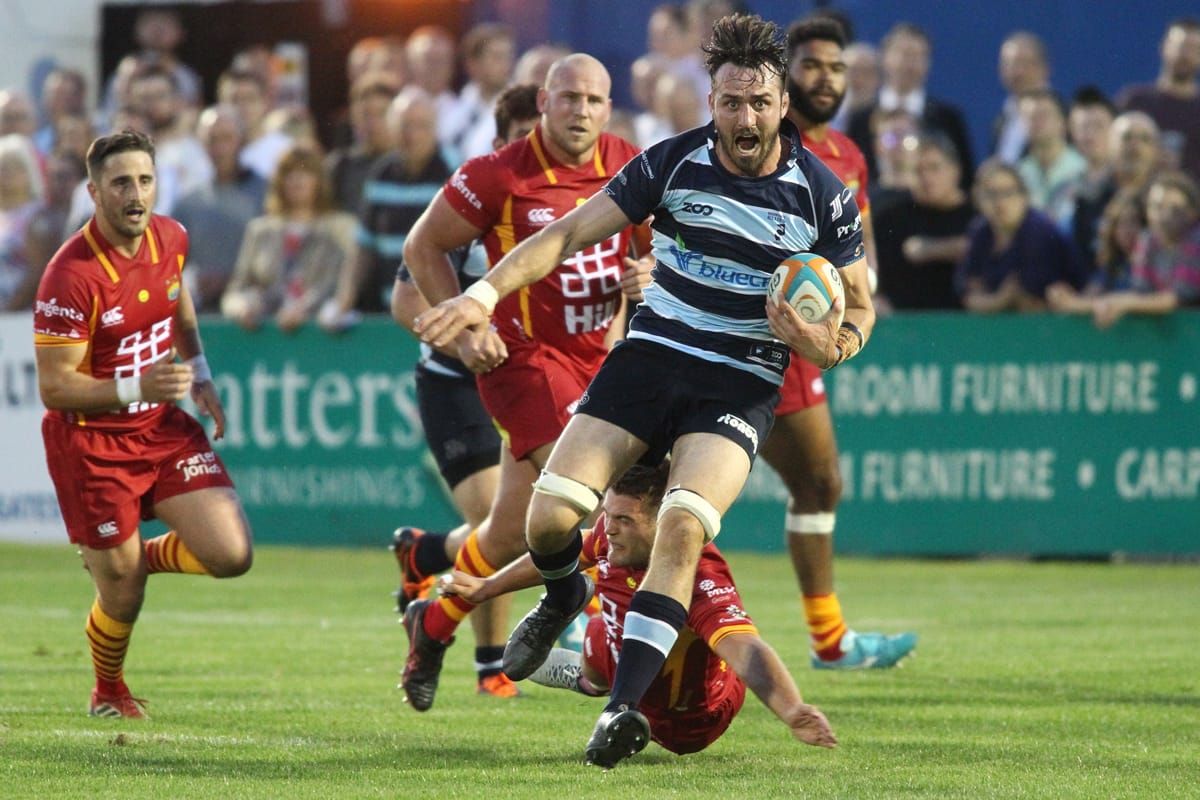 
Bedford were given a stern test on Friday night as they kicked off their pre-season campaign with a 50-24 win over near-neighbours Cambridge at Goldington Road.

Eight tries on the night made for a flattering scoreline, but the Blues were given a torrid time by the National One side who hadn’t turned up to be steam-rolled.

That said, the home side rallied superbly following a mid-match scare and were pleased to get the new season off to a winning start in front of 1,351 fans.

Speaking after the game, Ed Taylor said: “That was a very enjoyable game and obviously it’s nice to be back playing at home. Last year we played away at Plymouth and got a loss, so we're pleased to get a 50-24 win tonight and the lads put in a good shift.

"Cambridge are a good team who have recruited well over the summer, have a very good scrum and a really strong defence. We were made to work hard down the slope in the first half and the boys were given a good test.

"There were lots of positives tonight. It's always god to get a maul try as it is something that we pride ourselves on, particularly since Alex Rae has been forwards coach. The backs did really well for such a young group, I think Pat Tapley was the oldest one out there tonight, so it was great to see them firing as well.

"It's Cardiff Blues next and I'm really looking forward to that, get the Welsh boys down here and I'm sure we'll have a bit of fun!"

Bedford look to make an impact early on when a penalty sailed to the Cambridge corner. Ed Taylor took in the ball and the pack rallied round looking to drive over but Cambridge held firm. The Blues sent the ball to the backs with Oskar Hirskyj-Douglas and Joe Green getting involved before a dozen phases followed but the visitors put in a huge defensive effort before turning the ball over and clearing their lines.

Having looked solid in defence, Cambridge then showed what they could do with ball in hand as a flowing move saw them making good ground before a loose pass saw a turnover. With the ball back in possession, the Blues started to throw the ball around with Matt Worley making a fine break which ultimately set up the opening try. James Lennon, Sam Leeming and Pat Tapley were all involved before Dan Temm darted over the line just like he did the last time he was at Goldington Road. Leeming struck a fine conversion from out wide to make it 7-0.

A second try soon followed as new boy Charlie Reed stretches his legs to make yards before hooker Robbie Smith took in the ball for the score which Leeming converted. Two minutes later and it was 21-0 as Smith crossed for his second of the game. A driving maul made its way over the whitewash and the hooker came up with the ball which Leeming slotted over the uprights.

The Blues were certainly in the ascendancy and they came close to a fourth when Matt Worley pounced on a spilt Cambridge ball and scuttled along the wing before linking up with Green but the winger sent the pass to James Lennon a little high and a knock on stopped the attack.

It mattered not though as the Blues did score just after the half hour mark. Temm was heavily involved again as his marauding run almost saw the back rower crossing once more only to be chopped down inches from the line but he saw Lennon in support and popped the ball to the winger who scored with the extras sailing through the posts.

For all of Bedford’s half graft, they couldn’t quite close out the half as Cambridge sent a penalty to the corner. An initial maul attack was stopped, but a series of pick and go attacks followed with prop Ramaz Rukhadze going ovefr from close range and Ben Penfold converting just before the break.

Whatever was said I the Cambridge changing room at the interval had the desired effect as the visitors came out full of vigour. Heading down the slope it took just a few minutes for them to register a second try and it was a fine one. Some wonderful interplay saw former Blackheath man Joe Tarrant crossing the line for an unconverted score.

Cambridge almost snuck through in the 50th minute when a gap opened up but Joe Atkinson was on hand to make a fine cover tackle. Unfortunately, the Blues then shot themselves in the foot as a loose pass was gathered in by Matt Hema who turned on the gas to run clear and make it 28-17.

Plenty of changes were made by both teams, but it was Bedford who looked more settled as a result and they were soon on the attack. Leeming’s jinking run probably deserved a try but it was Ryan Hutler who did eventually score when he was played in by Rich Lane and Leeming converted his fifth of the night.

Back came Cambridge though with their captain Andy Henderson scoring following a good Oli Petrides break and the conversion made it 35-24, but the resurgence was soon snuffed out by the Blues who went on to score three more tries in the final ten minutes.

Tapley danced affine jig against his old team to score in the corner before Temm showed what a versatile player he is by popping up on the wing for his second of the night following an impressive double show-n-go from Taylor. Tapley then rounded off the scoring when Green intercepted a looping pass and played in his opposite wing to bring up the half century.