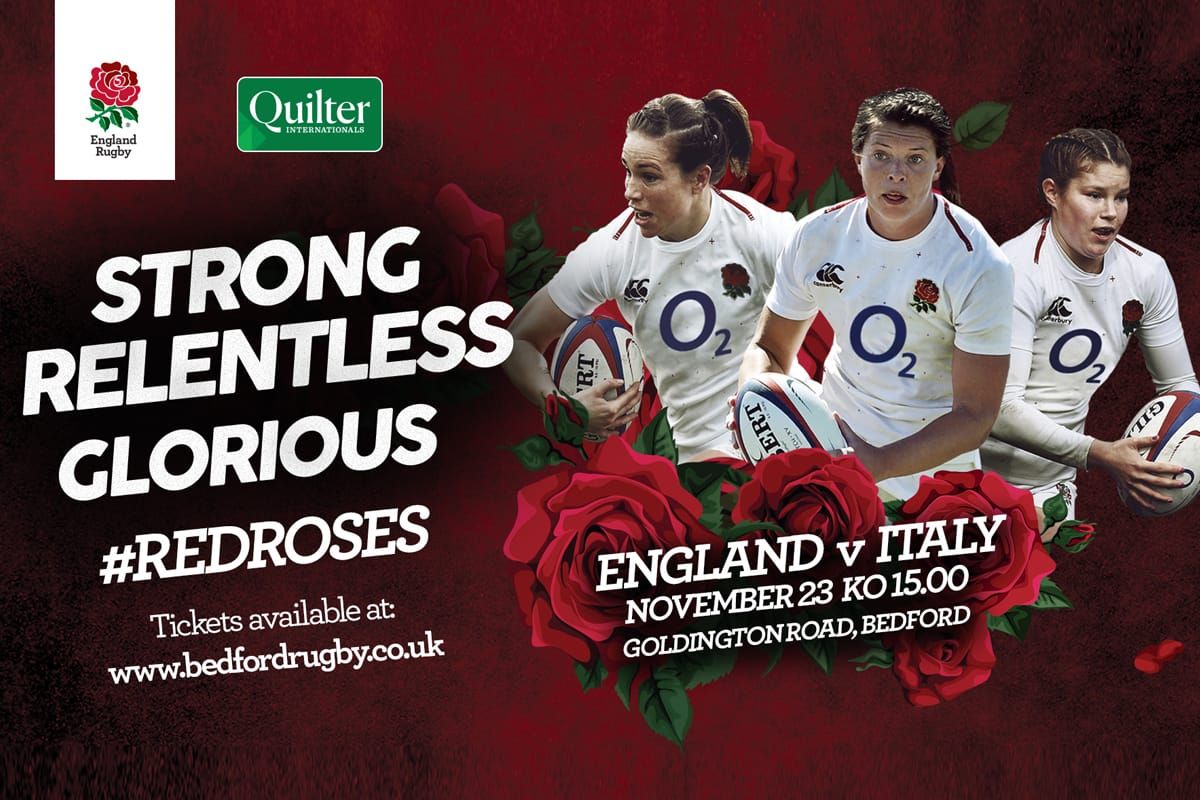 
Bedford Blues are delighted to announce that they have been selected to host the International Women’s clash between England and Italy on Saturday 23rd November 2019 (KO 3pm).

Goldington Road will open its gates to Simon Middleton’s charges as they prepare to face the Azzurri in the Quilter Autumn International series which also sees the Red Roses taking on France twice. Tickets are already available online.

Speaking about the announcement, Bedford Blues Chairman Geoff Irvine said: "We are delighted to welcome England and Italy Women’s teams to Goldington Road for the Quilter Autumn Internationals in November, there will certainly be a huge buzz around the town having hosted the U20s fixture last season.

“Bedford is a rugby town with a huge Italian community, so it is the perfect setting for such an encounter and one that we are very proud to be hosting."

The women’s game has grown enormously in England in recent years, helped no doubt by the 2014 World Cup win as well as the Grand Slam in the Six Nations this year. With Bedford also hosting the largest concentration of Italian people in Britain, the Club are excited to be chosen as the venue and expect plenty of support for both teams on the day as evidenced by the Under 20s Six Nations fixture held earlier this year.

England Head Coach Simon Midddleton said: “Bedford are a great club. When I was coaching at Leeds, every time we went to Bedford the atmosphere was amazing. They play a brand of rugby that’s never compromised, ball in hand, great entertainment. The fixture itself, the way we’re trying to play, and the way Italy play, fits. Given the whole Bedford ethos and how they play, it’d be nice for us to try and keep that tradition.

“It’s a fantastic ground and we know Bedford will embrace hosting an international fixture like Exeter and Doncaster did. Their fans are so passionate and love their rugby. It’ll be a great experience for us and another chance to take the Red Roses around the country.”

The expansion of women’s rugby continues to exceed expectations worldwide, with the sport experiencing unprecedented global growth. Participation levels are at an all-time high with 2.7 million players globally - making up more than a quarter of the global playing population. This includes a 28 per cent rise in registered players since 2017. For the second year running, more young girls have got into rugby globally than boys and more than 40 percent of rugby’s 400m fanbase are female.

Early bird tickets for the game are on sale now with a saving of £4 on adult tickets with ground entry costing £10 and £14 for a seat in the Eagle Stand. Whilst, Under 18s will gain entry for just £1 or £5 for a seat. To purchase tickets, click here. Order early to void disappointment.

Bedford Blues are also proud to announce that a range of hospitality packages will also be available for the game in both the Lifesure Suite and in the Blues Marquee. Prices start from just £40 per person and you can book your table by contacting Sophie Perry or Hollie Washford via email - sophie@bedfordrugby.co.uk or hollie@bedfordrugby.co.uk – alternatively call 01234 321880.