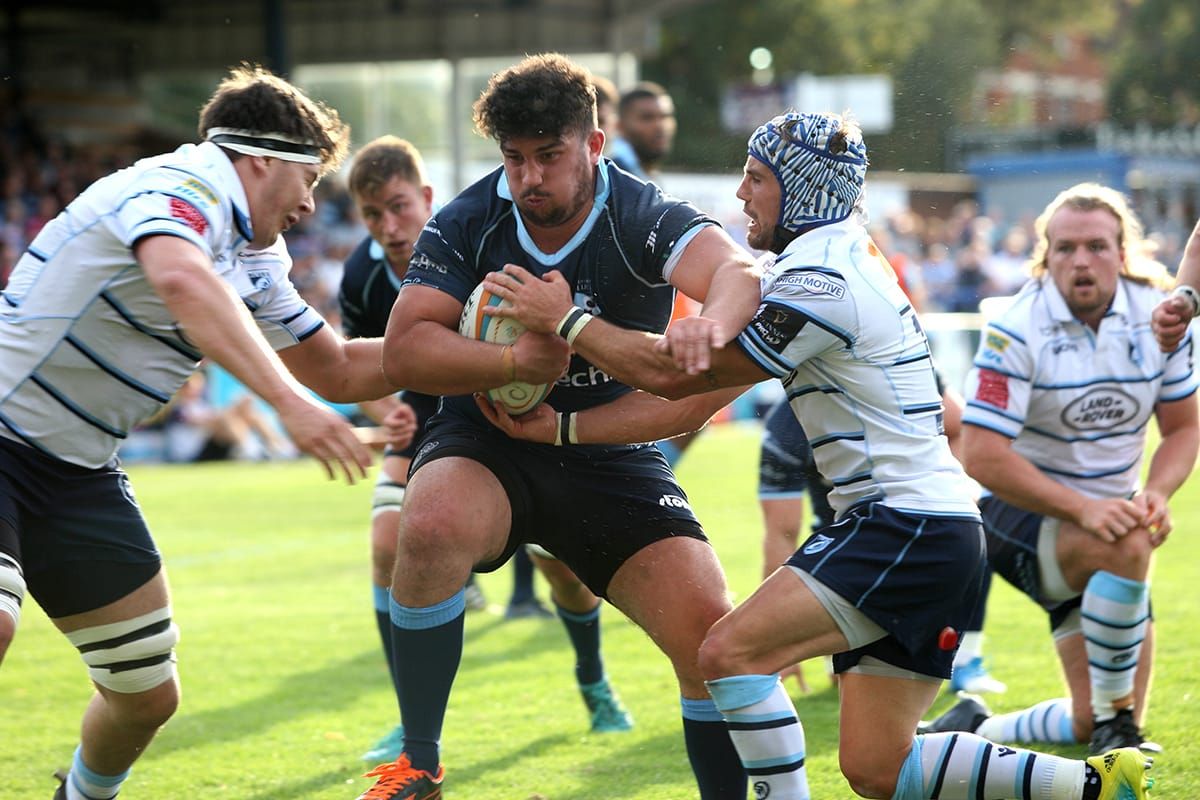 
Bedford’s pre-season campaign may have come to an end with a 14-39 defeat to Cardiff Blues, but there were plenty of positives for the home side to take into the coming season which kicks off against Ealing Trailfinders in the Championship Cup next weekend.

The visitors had raced into a 29-0 halftime lead, but the Blues never gave up and scored two well-worked tries after the interval through Jordan Onojaife and Joe Wrafter to ensure fans went home happy.

Speaking after the game, Wrafter said: “We were a bit slow out of the blocks in the first half and didn’t really front up but we managed to up our tempo in the second half and get stuck into them. There’s plenty of positives to take from that game and we needed a good defensive test like we had today before we head on to Ealing next weekend.

“We had a chat at half time and knew we had to bring some energy into the game after the break. The guys coming off the bench made a lot of impact but we’ve just got to have belief in what we can do and I think we did quite well in the end.”

Bedford didn’t get off to the best start and found themselves a try down within three minutes. A lineout midway inside the Cardiff half failed to find its mark and the visitors took possession and made it count. From left wing to right and back again, Jason Harries ran in the score with the conversion hitting the upright.

Bedford responded well and made good ground through Huw Worthington and Sean McCarthy but as they looked to spread the ball to the left, Ioan Davies plucked off the pass, made ground then played in Lewis Jones for the try with Jason Tovey adding the extras.

The home side just could find a footing in the exchanges and they fell further behind when a couple of penalties gave Cardiff field possession and a lineout on the Bedford five metre line. The driving maul was established and hooker Kirby Myhill came up with the ball which Tovey converted once more.

Cardiff continued to dominate and another succession of penalties resulted in a different approach with the visitors opting for scrums. Bedford couldn’t withstand and Sean McCarthy was carded but when Cardiff attacked again, the ball was overturned and Bedford cleared their lines.

Despite being a man light, Bedford managed to make some territorial gain and then a smart kick from Grayson Hart pinned Cardiff back inside their 22 following good work from Joe Wrafter, Josh Buggea and Jordan Onojaife.

But the men from Wales weren’t going to be held back for long and it looked like a certain try was on the cards when Tovey put a delightful grubber beyond the Blues defence but Ioan Davies fumbled the opportunity to score what looked a dead cert.

However, a try did follow from the resulting scrum as the dominant Cardiff pack shoved the Blues off the ball with Alun Lawrence going over for the fourth of the afternoon to make it 0-24.

Joe Green was introduced to the game when Oskar Hirskyj-Douglas took a knock and the youngster got the crowd excited when he charged down an attempted clearance to give Bedford possession close to the Cardiff line. Grayson Hart, Rich Lane and Jordan Onojaife linked up well but the lock was taken to touch.

Bedford continued to press from a lineout drive but as the ball came out, an interception saw Cardiff regain possession and kick into the Blues 22. Lane covered and cleared but Bedord were too eager and gave away a penalty for offside which the visitors put to touch. Once again, the driving maul did  and Will Boyde crossed for the unconverted score which ended the half.

Things got no easier for the Blues after the break with Cardiff scoring within six minutes. A free kick at the scrum then a penalty allowed the visitors to play some free-flowing rugby with Jason Harries scoring.

Bedford certainly didn’t give up and slowly forced their way back into The Cardiff 22 with some good play from Robbie Smith, Dan Temm and Green. A penalty followed with in for a scrum. James Lennon attacked from the back but was hauled down just short, but Onojaife was on hand to collect and work his way over with Sam Leeming converting via a helpful bounce off the post.

The Blues were in the ascendancy and started to play the flowing rugby that we know and love. The defence was tight and when a double hit dislodged the ball allowing Charlie Reed to clear downfield with his kick almost popping up for Pat Tapley but trickling to touch. Moments later the Blues were back in possession with Grayson Hart taking a quick tap penalty before Joe Wrafter carried the ball over the line for the try which Leeming converted.

Cardiff managed to subdue the crowd with a try in the 76th minute following a good initial break from Matthew Morgan. A scrum saw the ball being played wide to Ioan Davies who cantered over for the score which ended any possible comeback.

The Blues continued to press and look for another score. Hart, who returned to the pitch after Lennon picked up a nasty looking gash to the head, orchestrated an attack but a kick through from Rich Lane had a little too much on it and the visitors allowed it to run clear before the game ended soon after.