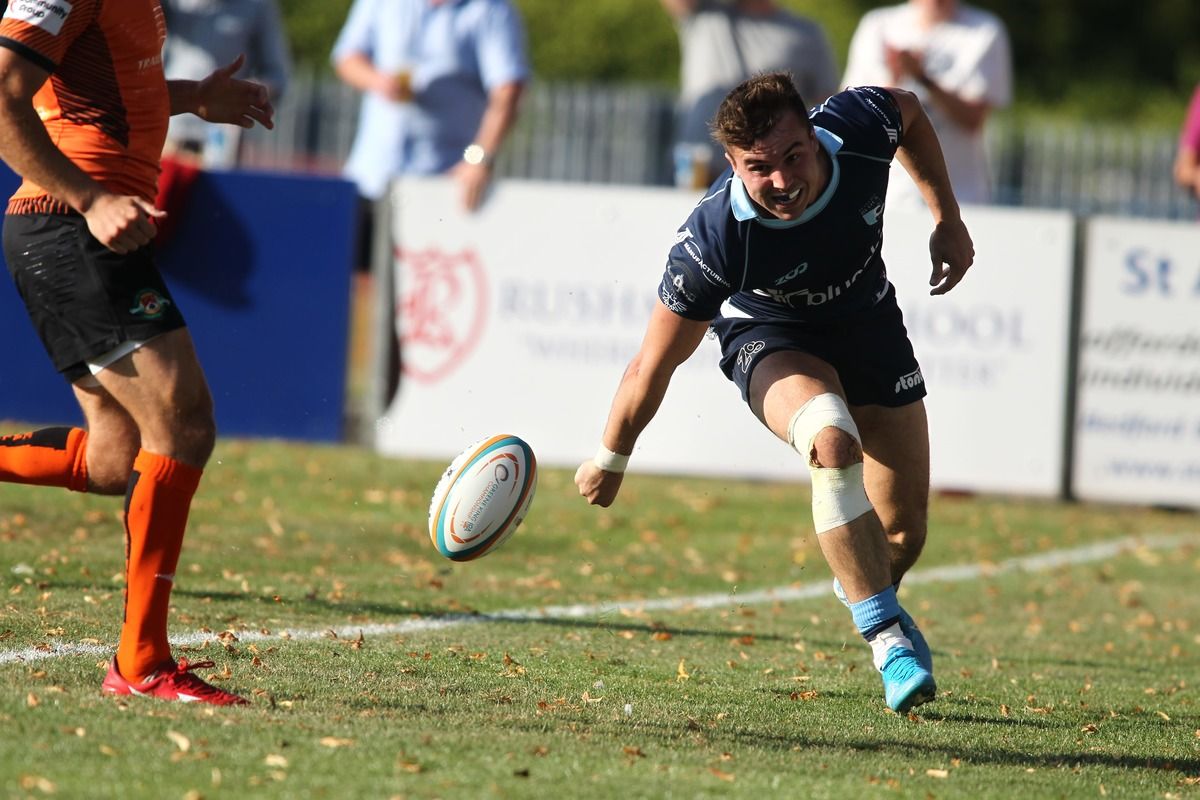 
Bedford Blues suffered a home defeat in the opening pool game of the Championship Cup on Saturday as holders Ealing Trailfinders ran in nine tries in front of the 1915 fans at Goldington Road.

The Blues did manage to seal a try bonus point thanks to scores from Pat Tapley, Dan Temm, Joe Atkinson and Ryan Hutler but Director of Rugby Mike Rayer was left disappointed with basic errors that cost the Blues dearly.

“We did really well to get that bonus point as our performance probably didn’t warrant it,” he said at full time.

“Ealing are a powerful side and ran over the top of us. We had plenty of chances on their five metre line but we just didn’t convert them whereas they punished us for any mistakes that we made.

“Conceding 50 points is never nice and we’ve got to take a long hard look at ourselves. We didn’t do the simple stuff today and against a side like Ealing, you just can’t do that.

Bedford enjoyed early territory with a couple of penalties punted to touch, but the Ealing defence was quick and soon forced errors but they weren’t able to capitalise.

The balanced opening exchanges came to an end in the 10th minute as Ealing centre Pat Howard made a fine break down the centre of the pitch. With support outside him James Corden-Reddy was on hand to dot down but Craig Willis missed a simple conversion.

The fly half soon made up for his error moments later when the visitors went over again. Easing secured a lineout then sent the ball along the line to Reon Joseph who glided in for the score which Willis converted from wide on the left.

Bedford went on the attack with Grayson Hart, Oskar Hirskyj-Douglas and Robbie Smith involved before Joe Wrafter took over and powered forward only to be stopped illegally. The penalty went to touch but the Blues couldn’t take the lineout ball and Ealing cleared their lines.

The game continued to be dominated by defences with Dan Temm and Joe Atkinson clattering anything that moved but neither could do anything when Ealing scored a third. Controlled build up followed a lineout and Kieran Murphy went over with Willis adding the extras.

The try served as a wake up call and the Blues scored a well worked effort soon after. Ealing’s rush defence as testing the referee’s patience as it strayed offside again but Bedford used the advantage well as Lewis Robling - who replaced Sam Leeming early on - burrowed forward before linking with Hart who popped the ball to Pat Tapley who forced his way over to score an unconverted try.

Sadly, the Ealing response was just as quick as they scored soon after the restart. Bedford had worked hard to win the ball back but an attempted chip over the top was well read with Ealing charging it down and offered a nearly clear run. Murphy did the leg work before passing to Jack Tovey for the score which Willis converted to make 5-24 at the interval.

It took the visitors just three minutes to extend their lead after the break as Tommy Bell made a break up the middle then offloaded audaciously - if not a little forward - to Rayn Smid who ran under the posts with Willis adding the extras.

Ealing continued to dominate as Harry Casson, Jordan Burns and Rayn Smid all added scores to take it to 5-50 with ten minutes to go.

Ealing were down to 14 as the game moved to uncontested scrums and Bedford sprang into life to claim what looked an unlikely bonus point.

Dan Temm got the ball rolling following some smart play down the left and Ed Coulson coolly drop kicked the conversion. Three minutes later and Joe Atkinson pounced to score his first in a Blues jersey with James Lennon adding the extras. There was then rapturous applause as the Blues got the all important fourth courtesy of a fine Ryan Hutler score and a dazzling conversion from Coulson.

Sadly, the final word went to Ealing as Tovey scored his second of the game with Shingler converting to make it 26-57 at the final whistle.

See all the tries and post match reaction from Mike Rayer HERE.