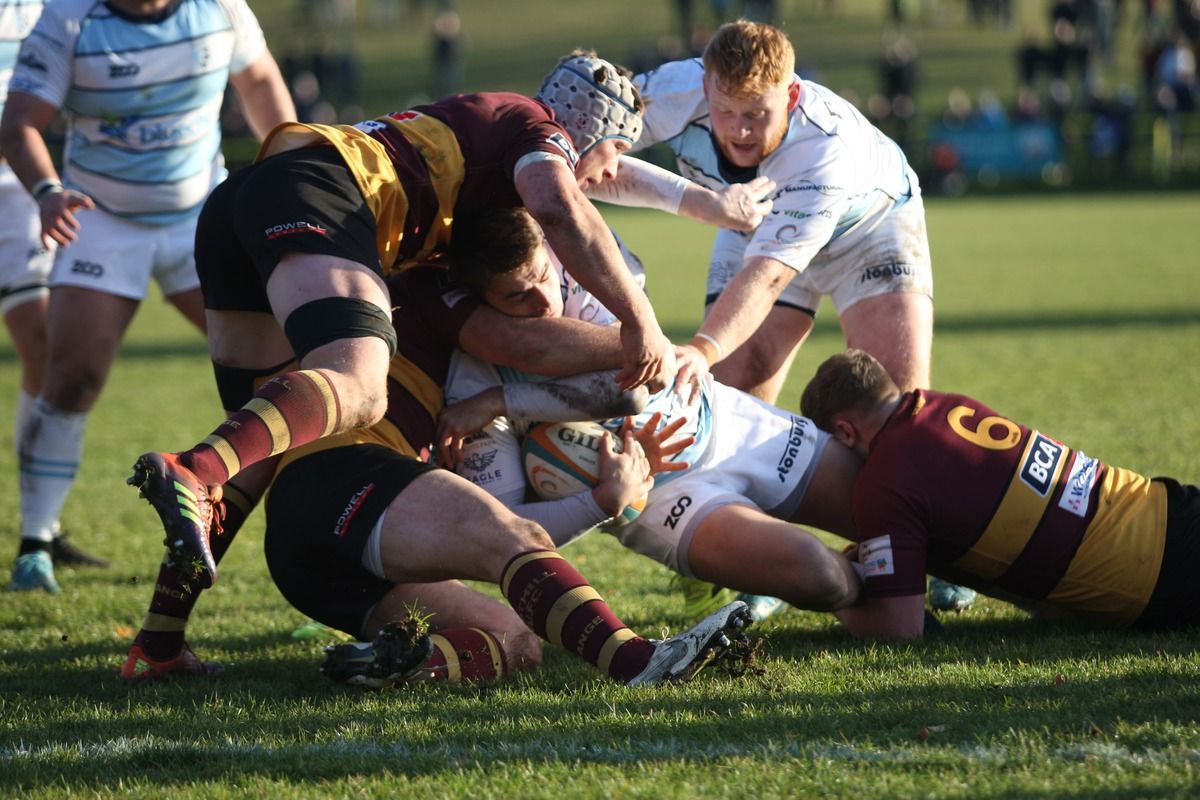 
Bedford Blues players, coaches and fans were left scratching their heads and wondering just how they managed to lose to Ampthill in the final pool games of the Championship Cup.

The Blues put in one of their most confident performances of the campaign but they just couldn’t finish off a determined Ampthill who managed to cross the whitewash with seconds left on the clock to seal a 17-14 victory.

“It really hurt that we lost that one,” said forwards coach Alex Rae at the end of the game. “”I’m gutted for the boys as it wasn’t through a lack of effort and they really couldn’t be trying any harder. It’s almost systematic of where we are at the moment where 50/50 breaks aren’t going our way.

“We do so many good things but then we let ourselves down with one or two bits of detail let us down and it ended up costing us. The work rate was great and I really wanted the boys to get the win as I’m sure that it will lead to another and lift the doom and gloom. We’ve just got to roll our sleeves up and keep fighting.”

On a brisk December lunchtime in the heart of Bedfordshire 1651 rugby fans turned up for an intriguing cup match between Ampthill and Bedford which would act as a dress rehearsal for the league encounter scheduled on Boxing Day.

Having already won the reverse at Goldington Road and having gave Ealing Trailfinders a real run for their money last weekend, it was the home side who got the first real opportunity of the game when the Blues were turned over from the kick off and then conceded penalty which went to touch. Ward threw a wonky one though and Bedford were off the hook.

The Blues were on the right side of the referee’s whistle during the early exchanges with a series of penalties allowing the visitors to find touch in the Ampthill 22. Dan Temm collected the ball but the maul went nowhere fast so Oskar Hirskyj-Douglas powered through and came close before James Lennon sniped over from close range with Will Hooley concerting.

Ampthill regathered well and went on the attack with Karim Lynch and Sam Hanks causing problems but it was a well worked move from a scrum which levelled the scores. Kevin Barrett looked like he’d attack with his backs outside him, but he travelled around the back of the scrum and played in Spencer Sutherland on the blindside before Louis Grimoldby levelled the score.

There was then a huge amount of play in the midfield with neither team really. Skiing ground. Sean McCarthy, Robbie Smith and Henry Paul all carried well while Jordan Onojaife and Will Carrick-Smith Smith were on hand to break through. But Ampthill were stubborn and turned over superbly before chipping through only for Matt Worley to race back and dot the ball down first despite celebrations from the home supporters who felt their man had won the race.

The Blues defence was being tested as Ampthill looked to get their noses ahead but an attacking maul was stopped by the Bedford pack before Josh Buggea somehow came out with the ball which allowed Hooley to clear.

Both team were reduced to 14 in the 31st minute when handbags occurred following a good Blues attack which resulted in a penalty. Dan Temm and Shay Kerry were the men sent to the bin with the referee reversing the penalty in Ampthill’s favour.

But Bedford weren’t done and another superb Hirskyj-Douglas break paved the way for The Blues second try. More penalties went the way of the Blues before Worley was held up on the line. The Blues scrum was powerful and the ref had no hesitation in running under the posts to ward Bedford seven more points.

There was still time for more points though as Ampthill won a penalty just before the break which Grimoldby dispatched with ease to make it 10-14 at half time.

Ampthill looked to build momentum after the break but the Blues defence remained strong with Ryan Hutler and Joe Green making good tackles while Buggea continued to get in the action intercepting passes but there was no way of breaking away.

Bedford’s pack continued to do the business at the lineout but were left fuming in the 49th minute when Dave Ward cynically dragged down a rampaging lineout which was destined for the try line. All eyes were on the referee to see whether he was going to award a penalty try and/or brand the yellow card for the hooker, but nothing more than a penalty followed much to Mr Ward’s pleasure.

The Blues failed to capitalise on their chances with Ampthill showing plenty of grit and determination in defence to repel Joe Wrafter who was centimetres away from grounding the ball.

Pat Tapley showed why he is such a dangerous player as he went on an astonishing solo attack which started in the Blues 22. The winger arched a superb run before chipping ahead into space. Ampthill covered, but Tapley was on the man immediately and his hard work drew in a penalty but the swirling wind saw Hooley’s penalty attempt drift just wide of the uprights.

It proved to be a costly miss as Ampthill went on the attack. A scrum in the Blues 22 saw replacement scrum half Leon Fukofuka break along the blindside and grubber through, but there was a little too much pace on the ball and it rolled to touch.

Bedford were on defensive duty and after a huge tackle saw a knock on, things looked positive for the Blues as they won the scrum and looked to clear their lines. Ampthill had other ideas though as Lynch ran the ball back into the Blues defence before the home side went through numerous phases resulting in Billy Johnson stretching over the try line to score with Grimoldby adding the extras to seal bragging rights for Ampthill once again.