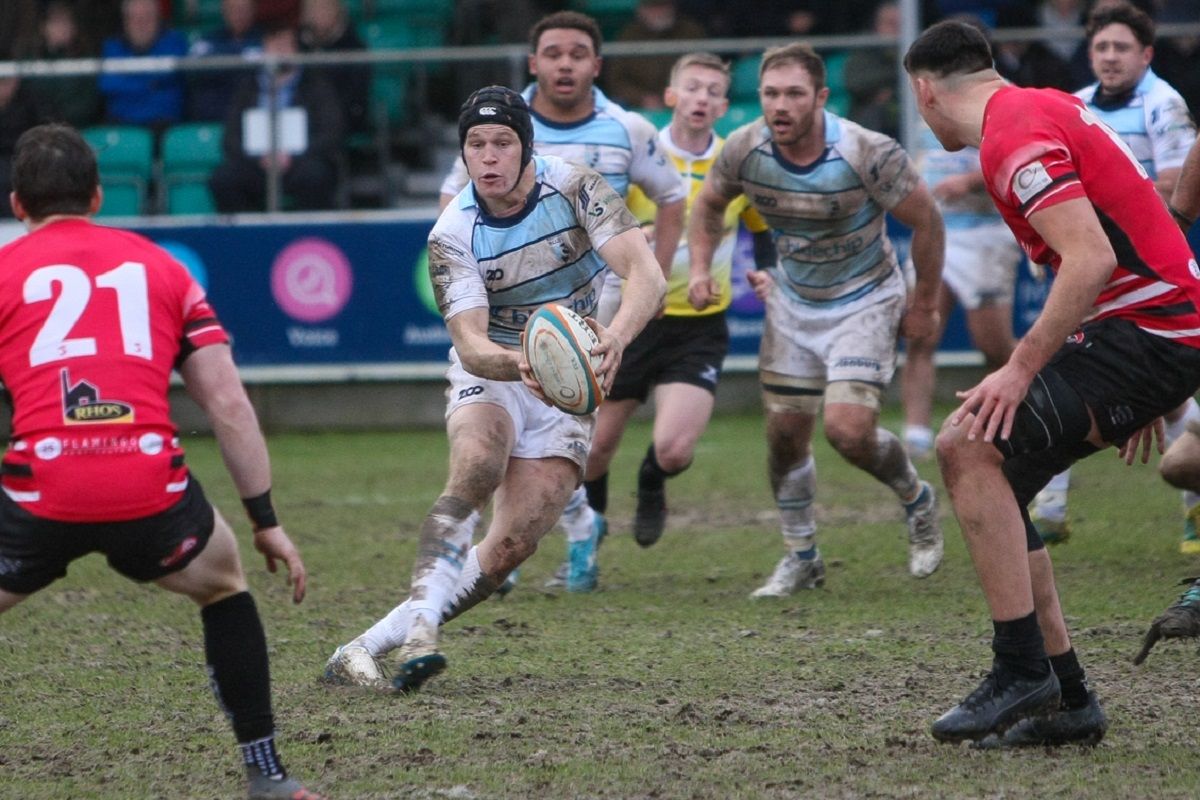 
A gritty and determined performance saw Bedford Blues take a deserved losing bonus point from their trip to second placed Cornish Pirates, being edged out 18-15 at The Mennaye, Penzance.

Pirates led 12-10 at the break as number eight Dan Temm crossed the line for Blues after a sustained build up of possession plus there were five points from the boot of Will Hooley in an end to end first 40 minutes.

In the second 40 a Matt Worley try late on put Blues within touching distance of completing the comeback but it wasn’t to be in the end at The Mennaye as Pirates held on to win an entertaining and closely fought contest.

Blues got on the board first after just 15 minutes. Hooley made no mistake from the tee about 40m out, overcoming the wet and windy Cornwall conditions to kick the scoring off via the right post.

Hooley’s opposite number Will Cargill failed with his first kick of the afternoon inside the opening 60 seconds but he made up for it when kicking the conversion from the first try of the afternoon after 20 minutes.

The driving maul of the Pirates forced several penalties in the first half and from this particular attempt they made it count with Tom Duncan going over.

Both sides had their spells of possession throughout the game and particularly in the middle section of the first half, Blues full back Pete Lydon and Pirates winger Robin Wedlake both made darts through the middle but were just short.

It was Wedlake who was next to cross the try line on 33 minutes. Pirates constructed a well executed move to set it up, Kyle Moyle skipped past two challenges before drawing the man and offloading to allow the speedster to dart and slide over. Cargill’s conversion made it 12-3.

The conditions hampered Blues on two occasions from the restart, Hooley sent some divine kicks behind the Pirates defence but it kept sticking in the mud and inhibited the wingers having an opportunity to chase.

Joe Wrafter was held up after a dominant burst on 38 minutes but it was only delaying the inevitable as Blues made it a two-point game with one of the last passages of play in the first half. From the subsequent scrum, Dan Temm went over and Hooley made it 12-10.

Some crunching tackles started the second half, Cargill kicked a penalty on 46 minutes before his replacement Javier Rojas Alvarez also slotted over three points just past the hour.

Buoyed by two wins to start 2020, Blues never gave up and when Matt Worley charged to the line from 40m with ten minutes to play, The Mennaye was worried that Pirates might be breached at home for only the third time this season.

It wasn’t to be, however, as the hosts held strong in the concluding passages of play to grind out victory. A hearty performance from the Blues. Two massive home fixtures coming up.