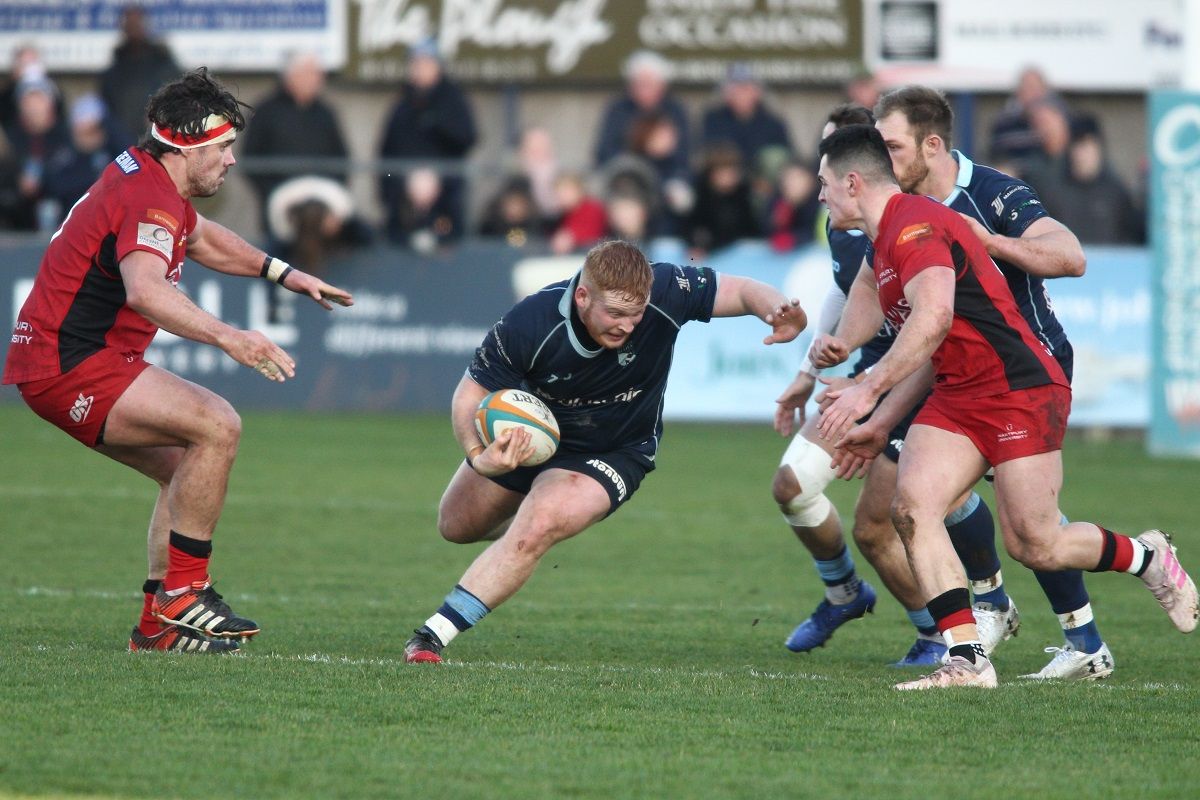 
Bedford Blues continue winning start to 2020 with 28-23 victory over Hartpury.

Blues continued their triumphant start to the new decade with their first Goldington Road victory of the season after edging a thrilling game against Hartpury.

Mike Rayer’s troops were never behind in a game they controlled, and they led 20-17 at the break thanks to tries from home debutant Pete Lydon and Rich Lane plus points from the boot of Will Hooley.

In the second 40, Blues were penned in at times, but stood up to the defensive test posed by the visitors and a further try from replacement scrum-half James Lennon and more kicks from Hooley secured the victory.

It was the dream Goldington Road debut for Lydon who crossed for the first score of the afternoon after just eight minutes. Dean Adamson brilliantly broke the gain line to burst clear before setting up Lydon, he was denied initially but when he received the ball again it was 7-0 to the Blues.

The lead didn’t initially last for too long as Hartpury levelled proceedings on 12 minutes. After sustained pressure inside the Blues 22, Akapusi Qera forced his way over. Josh Bragman added the extras.

A penalty from Will Hooley put Blues back into the lead, confidence was brimming in the team by that point, and they extended the lead to double figures when Lane crossed after 20 minutes.

This time it was exceptional work in the air from Dan Temm to collect a high ball, he steadied himself before beating the first man and offloading for Lane to burst over from 25m. Again, Hooley slotted the extra two.

Bragman and Hooley traded penalties around the half hour mark, but the scoring wasn’t yet complete for the first half as Hartpury made it a half-time score of 20-17 through a converted try from Seb Nagle-Taylor.

After the restart both sides had their spells of dominance and again both kickers traded three points before the hour mark.

It required a monumental defensive shift for Blues to stem the tide of Hartpury attack and keep hold of their winning advantage – the back line deserved something for their efforts, and they got it on 64 minutes with a breakaway try.

Lydon sent a long kick from his own 22 to the Hartpury one, their scrambling backs couldn’t judge the bounce, leaving Lennon to nip in and sprint towards the line. Hooley sent his conversion just wide leaving an eight point advantage for the final 15 minutes.

Hartpury thought they had found a way back into the game late on but as Bragman chipped through, replacement Matt Worley beat his opposite number to the ball leaving Hartpury dejected and with a 5m scrum.

After a few phases, Bragman took the opportunity to kick for the posts after a penalty, meaning the visitors had at least a bonus point while trying to chase the game.

It was never in doubt, however, as Blues calmly saw out proceedings with some high line speed and determination to put Hartpury under pressure in their own half and force the mistakes.

Another superb performance. Two from two in 2020.