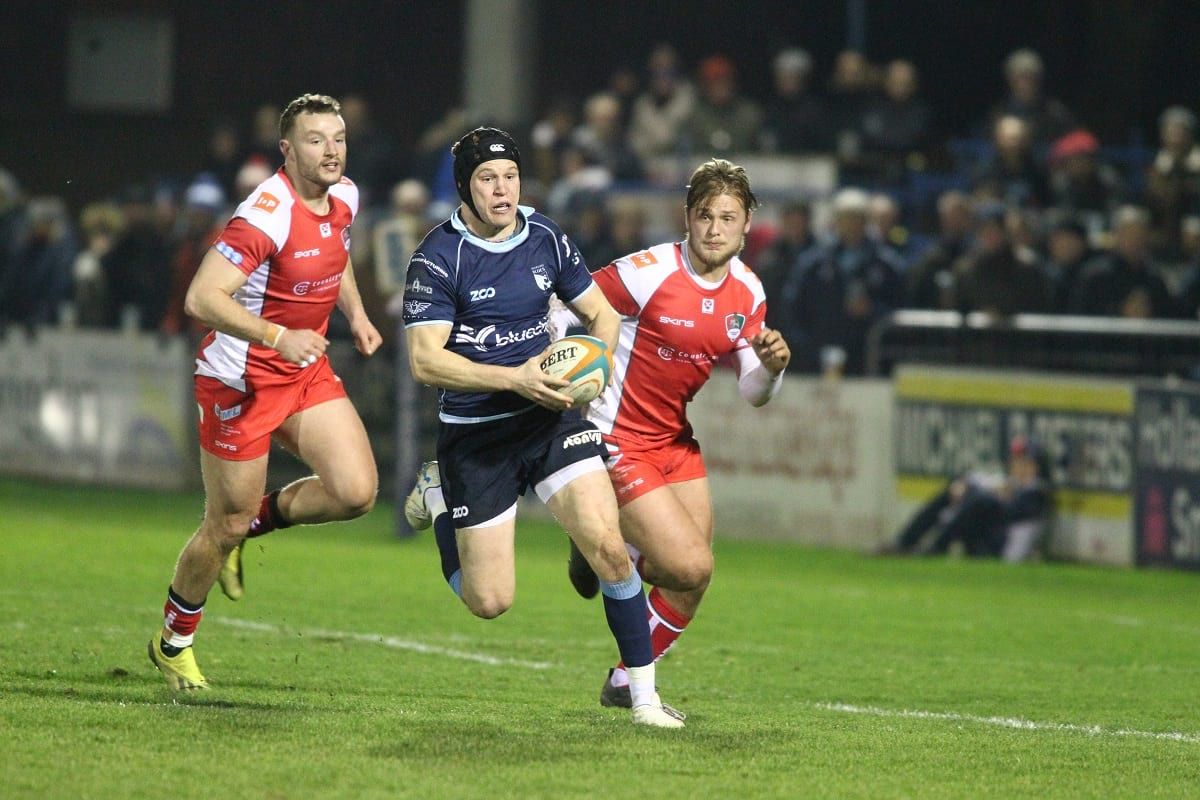 
A monumental defensive performance ensured Bedford Blues made it three wins on the trot at Goldington Road with a battling 19-15 victory over Coventry.

Blues led 12-10 at the break thanks to some ingenuity from the boot of Will Hooley; the fly-half twice kicked through the Coventry backline for Ryan Hutler and Oskar Hirskyj-Douglas to score.

In the second 40 Coventry put loads of pressure on the Blues try line, at one stage the visitors went through 25 phases near and inside the 22 before Blues forced a knock-on.

A further second half score from Alafoti Fa’osiliva – his first for Bedford – ensured Blues’ heroism in defence was converted into points in attack as they made it four wins out of five to start 2020 and continue their march up the Championship table.

In the final Friday night lights fixture of the season, both sides had their spells of dominance and the fact neither side could ever really pull away on the scoreboard showed how closely fought a contest this really was.

Blues started the brighter in terms of territory but a couple of handling errors when trying to play through the phases allowed Rory Jennings to kick the first points of the evening and put Coventry into an early lead.

It wasn’t long before Blues found their way onto the scoreboard as Hutler dotted down for his eighth of the season on 21 minutes. Hooley kicked high for the winger to chase and when the Coventry defender remained static, Hutler used his momentum to collect and sprint to the line. Hooley’s conversion made it 7-3.

In a topsy-turvy contest, Coventry hit back to retake the lead approaching the half hour. Right winger James Martin cut a lovely line to open the space, offloading at the right time for Ben Nutley to score. Jennings’ conversion was good.

Back came Bedford as neither side could keep the ascendency for too long and Hirskyj-Douglas’ try on 34 minutes ensured Blues would take the lead into half-time.

A couple of minutes before; Matt Worley had come agonisingly close to the line only for his feet to get tangled, this time he was on hand to collect another chip through from Hooley then have the presence to get towards the touchline and launch the ball back in play for the try.

Again Blues wanted to carry the ball in the early parts of the second half and they were rewarded for their efforts when Fa’osiliva ran a neat line to find space and force his way over the line. Good play through midfield presented the opportunity and the Samoan didn’t need a second invitation to score.

Hooley’s conversion made it a nine-point game but again it was back on a knife edge mere moments later when Will Owen finished off a neat counterattack to get the game back to 19-15.

That might have been the end of the scoring, but it wasn’t the end of the story as Coventry kept making their way towards the 22 only to see their efforts thwarted by the Blues defence.

There was that immense resistance on the 25 phase play on 52 minutes and a handful of others as well; none more so than with the final passage of play when Coventry kicked to the corner but Blues powered back against the driving maul to force a fumble from David Halaifonua.

Blues still riding the crest of the 2020 wave. 18 points already secured this year. Onto Ealing next weekend…