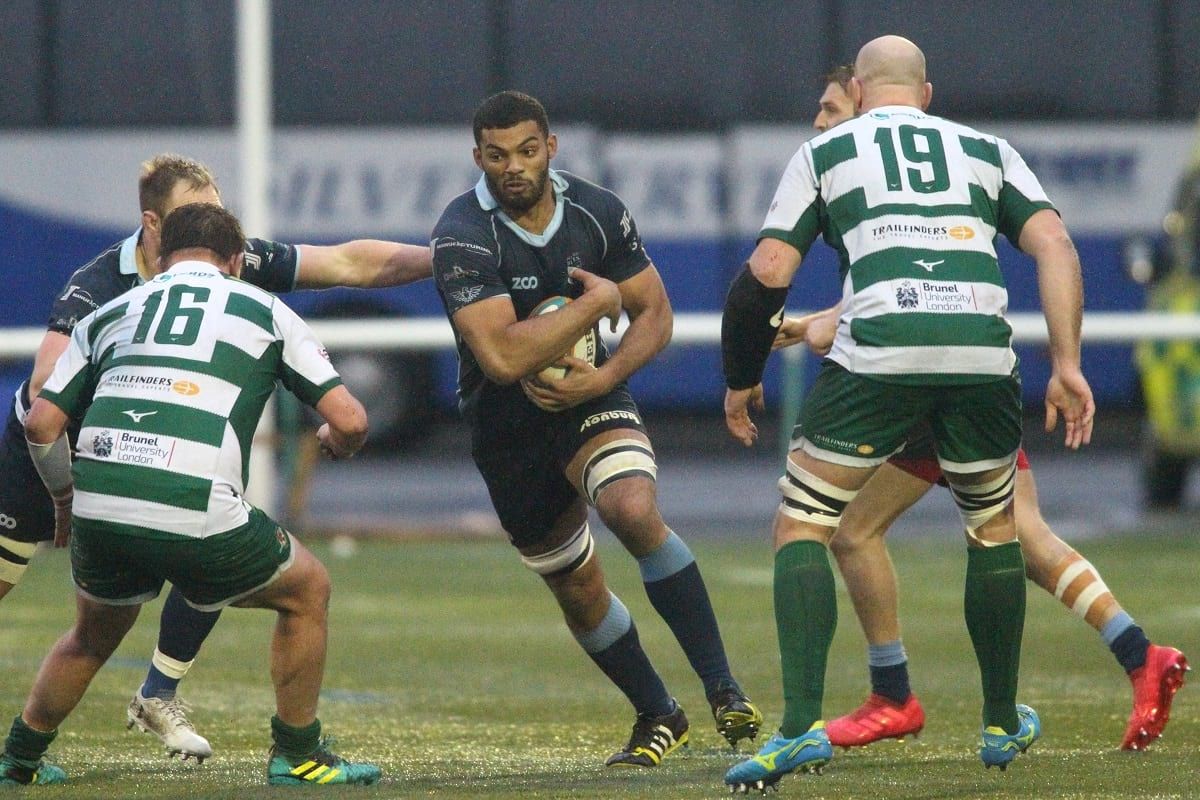 
Bedford Blues suffered just their second defeat of 2020 as they went down 38-5 at second placed Ealing Trailfinders.

With Storm Dennis causing havoc across the country, conditions at Trailfinders Sports Ground were difficult all afternoon; especially in a first half where only seven points were scored through Pat Howard’s converted try for Ealing.

In the second 40 the hosts pulled away on the scoreboard to run in another five tries through a penalty try, Reon Joseph, Alun Walker and a brace from Kieran Murphy.

Despite the scoreline, Blues scored the try of the match for their solitary points of the afternoon; a lovely sweeping team move saw Matt Worley offload to Ryan Hutler to sprint clear and score his ninth try of the season from just 17 appearances.

Blues’ preparations for the trip to the capital weren’t helped by the late withdrawal of two players from the starting XV through a virus, and that twinned with the wet and swirling conditions made an extremely difficult proposition.

Jordan Onojaife was voted Bedford’s man of the match and that decision stemmed from his ability to secure numerous lineouts – both when Blues had the throw and on the steal – as neither side could get too much of a foothold on the contest with set pieces particularly problematic for the most part.

Kicks were going out on the full all afternoon which halted both teams in their advancements, while some chips through the opposition defence would initially bounce before the 22 yet the wind would carry the ball into the dead ball area as possession changed hands countless times.

Ealing struck first on the scoreboard after 12 minutes. After two reset scrums, home number eight Rayn Smit burst forward and found a pocket of space to pop the ball off for Howard to score.

Both sides passed on the opportunity to kick at the posts with the problematic conditions, meaning that was it in terms of the scoring until half time; Jack Tovey did make a sprint to the line on 17 minutes but dropped the ball two metres short following a terrific covering tackle from Worley.

The second 40 didn’t start on a great footing for Blues as Ealing were awarded a penalty try two minutes after the restart. The home sides scrum was pushing Bedford over their own try line, so the referee awarded the seven points.

Clever work from hooker Matt Cornish saw Ealing run in their third try just five minutes later; he was brought down after a surprising 40m dart through the middle, but the ball was recycled, and Murphy bundled himself over.

Back came the Blues and they were rewarded for their efforts with an absolute peach of a try. Quick passes through numerous hands set Worley away and he had the astuteness to see the covering tackle and pass to Hutler at the right time to reduce the deficit.

That gave Blues a glimmer of hope for the remainder of the game but Ealing managed the final quarter of the contest better and ran in three tries in the final 15 minutes to make the scoreline more flattering than the game deserved.

Still four wins out of six for Bedford in 2020. Doncaster are the visitors on Sat 29 Feb with Blues eager to defend their perfect home record this year.