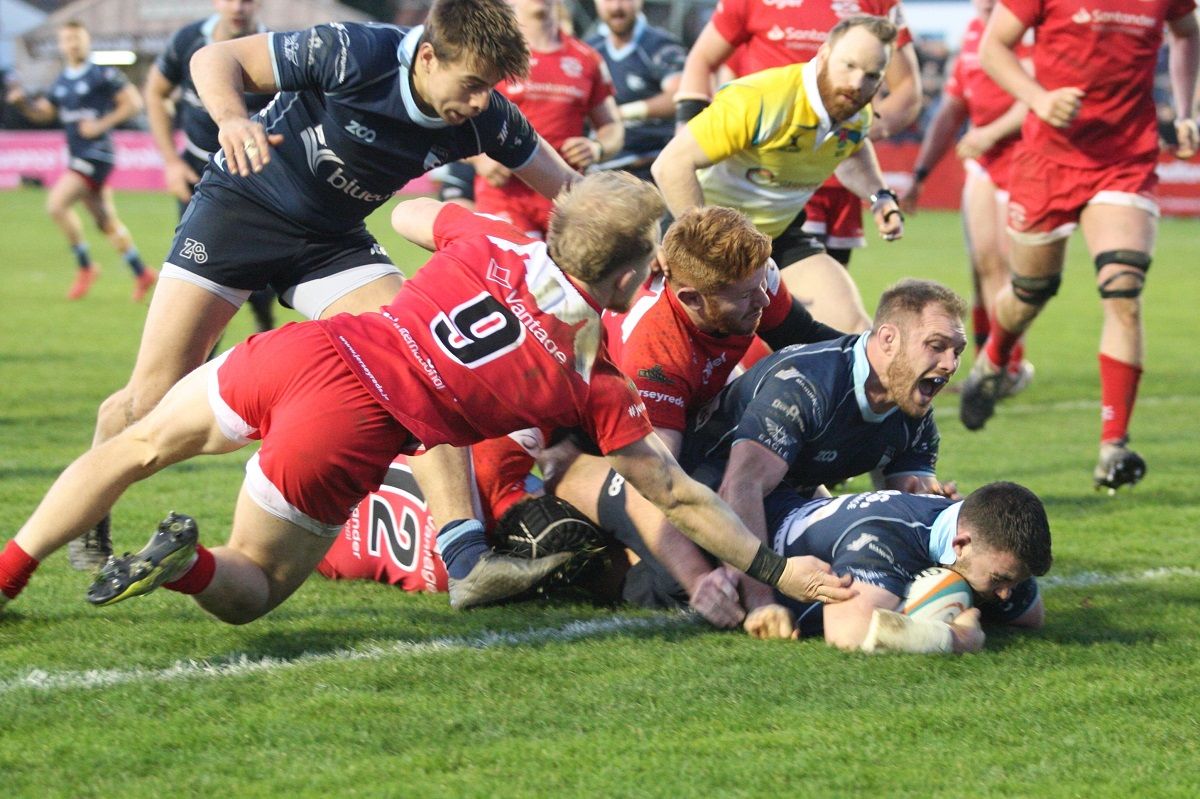 
Huw Worthington’s converted try with the final passage of play saw Bedford Blues make it back to back home victories with a dramatic 27-25 success over Jersey Reds at Goldington Road.

The Blues trailed 18-17 at the break in a thrilling game but battled back to secure the most nail biting of victories; and with it, the first five-point haul of the season secured in-front of the Goldington Road faithful.

It was an end-to-end affair played to the highest level; Jersey controlled the opening exchanges but had to settle for a penalty from Brendan Cope after three minutes following a monumental defensive shift from Bedford.

Blues hit back and made territory count with their opening attack inside the Jersey half, Will Hooley opted to kick high towards Ryan Hutler who collected and darted to the line. No conversion.

Jersey had the better of things throughout the midway section of the first half and overturned the scoring to lead by 13 points by the time 21 minutes had elapsed.

First Alex Morgan cut inside his man to dot down on 14 minutes then just three later they had their second when replacement back row Jake Upfield crashed over following a charge down. Cope kicked one of the conversions plus a penalty to make it 5-18.

But you couldn’t write either side off in this back-and-forth contest and once Blues applied the pressure deep inside the 22, they got their rewards to make it a one-point deficit at half-time.

A succession of penalties saw Hooley continue with the plan to kick to the corner, this time a couple of phases elapsed before Grayson Hart dotted down from close range for a converted try.

Despite Blues being held up late on in the half, they weren’t about to give up at scrum time and a powerful set piece put Jordan Onojaife over the line. Hooley dragged the kick wide so Blues trailed at HT.

The second half was played with the same intensity, there just wasn’t the same volume of points, Greg Dyer went over for seven points for Jersey on 49 minutes but that was all the visitors could muster as they looked to see out the game.

Blues kept to their principles and the belief that they would get something from the game, Hooley made a brave decision to slot a penalty with eight minutes to go to at least bring the deficit to five heading into the final moments.

Not too good for the heart rate but in terms of drama, this was right up there; it’s become almost a trademark of Goldington Road to win it at the death and this was no less dramatic than the multitude of examples from yesteryear.

To add to the tension, Blues were held up again after some sustained pressure, but they weren't kept out for long; the scrum did its job to send Huw Worthington over.

Hooley held his nerve to kick the conversion for a remarkable 27-25 victory, nothing less than the squad deserved for a gutsy and determined performance.

Nervy. Tense. Dramatic. Back to Back home victories. Goldington Road is BLUE!