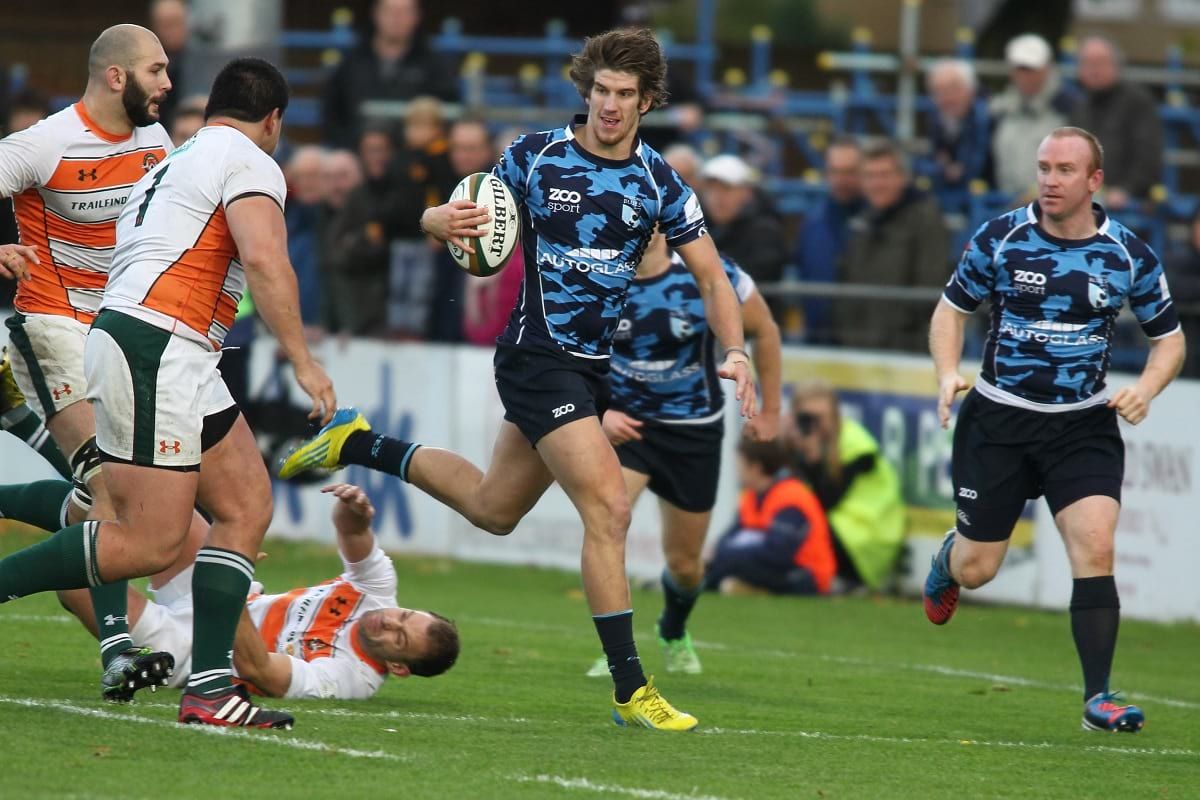 
The first meeting between the two sides for 92 years, we’re continuing our look back at some memorable Goldington Road afternoons with the bonus point 31-14 victory over Ealing Trailfinders in 2013.

Last month we took a walk down memory lane by looking at three notable anniversaries in Blues’ illustrious history; now we’re carrying on our look into some of the most important Bedford matches of recent times by bringing you a full replay of the Ealing game.

To be streamed in full on our Facebook page from 3pm this Saturday, reminisce about another fantastic afternoon at Goldington Road by joining us to watch Sky Sports’ coverage of the day, ably supported by the match day commentary from Johnnie Hammond and Pat Sanderson.

Blues’ outside-half, Jake Sharp said post-match: “This match was all about getting the win and the five points. We showed some really good aspects and we’re happy with the win. We’re confident in what we do and the scoreboard showed that.”

The game itself took place at Goldington Road on Sunday 27th October 2013 with both sides heading into the fifth match day of the Championship season looking for their first victory of the campaign.

In Ealing’s first ever season in the second-tier after a meteoric rise in the previous few years, they were rooted to the foot of the table without a point after four defeats; they ran Cornish Pirates close at home but were comprehensively defeated by London Scottish, Rotherham and Leeds Carnegie.

Bedford had secured a victory in the British & Irish Cup but been unfortunate in the Championship; try bonus points were secured in defeats against Bristol and Leeds Carnegie, alongside close encounters at London Welsh and Jersey.

Conditions at Goldington Road were far from comfortable on this particular occasion, the wind was playing havoc for the kickers and that was evident when James Pritchard’s conversion to Ollie Dodge’s 12th minute score looked to be going wide before being blown back between the posts.

The wind was going down the slope all afternoon meaning if Blues could keep themselves in the contest before the interval then they’d have a great chance of utilising the conditions in the second half.

Ealing, visitors to Goldington Road for the first time since Christmas Eve 1921, had the wind at their backs first half and levelled the scoring after just 18 minutes when centre Tom Wheatcroft broke the gain line then sent full-back Andrew Henderson through to score.

A TMO review for a forward pass proved inconclusive and the visitors again profited from the video replays on 27 minutes when scrum-half Morgan Thompson went low from close range and was found to have just about made the line. Trailfinders led 14-7.

Blues closed the deficit to 14-12 at half-time through another Dodge try that came from more ingenuity from Sharp. For the first try, Sharp kicked high for the left winger to collect and score; this time he went low through the defensive system to register another assist.

It was a masterclass of a performance from Sharp, who was rightfully awarded man of the match post-match, and the fly half was involved early in the second half as Blues quickly wrapped up their try bonus point just after the hour mark.

A quick burst on 45 minutes sent Sharp clear before a perfectly timed offload for Pritchard to convert his own score, then he took a gamble with a long pass that evaded the rushing defenders which full back Mike Le Bourgeois collected to cut inside and smash his way over the line. Blues were in-front again at 26-14.

In truth, this was as much a heroic defensive display as a clinical offensive performance; Ealing passed up five different opportunities to take easy kicks at the posts when trying to put Blues’ try-line under pressure, although they failed to register a point after the break as Bedford resisted the onslaught.

Replacement hooker Scott Spurling and Sharp did enough to hold up Jordan Saunders’ unique attempt at trying to dot down ten minutes from time, but that was as close as Ealing came to forcing a comeback.

Blues added the appropriate gloss to the performance with a try from the last passage of play. Replacement scrum half Darryl Veenendaal went clear before playing it through the hands; Don Barrell was stopped just short before an offload set Pritchard through for his second try of the afternoon.

Don’t forget to join us on Facebook Live this Saturday at 3pm to re-watch the game!